How to Prevent Brinelling on Casters 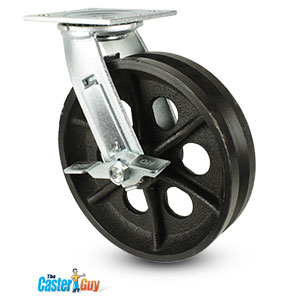 You can easily roll carts and objects around tight corners with swivel casters. Swivel casters are characterized by their ability to rotate 360 degrees at the top of the wheel. Unlike rigid casters, they don’t roll in a fixed, straight path. Swivel casters feature a swiveling action that allows them to rotate.

Casters with a high brinell rating are less likely to succumb to brinelling than their counterparts with a low brinell rating. This phenomenon is known as “brinelling” as a reference to the brinell scale of hardness. Originally pioneered by Swedish engineer Johan Brinell at the turn of the 20th century, the brinell scale of hardness is a measurement of a material’s ability to resist permanent deformations.

Be conscious of how much weight your casters are exposed to. All cases have a load capacity. The load capacity is the maximum amount of weight that a caster can safely support. If you exceed the load capacity of a caster, it may develop permanent intentions in one or both of its raceways.

Always check the load capacity of casters before using them to roll or transport objects. Load capacities can vary. Some casters can support over 2,500 pounds, whereas others can only support a few hundred pounds. Regardless, you shouldn’t exceed the load capacity of a caster. When exposed to too much weight, a caster’s raceway or raceways may performantly deform.

Lubricating casters can protect them from brinelling. Brinelling is the result of ball bearings pressing into a raceway to the point where they cause permanent deformations. Under normal operations conditions, the ball bearings should roll smoothly in raceways. Lubrication will encourage a smooth rolling action by reducing friction.

Not all casters require lubrication. On the contrary, many swivel casters feated a sealed design. Nonetheless, some swivel casters can be lubricated, which will further protect them from brinelling.