An Introduction to Rigid Casters and Their Pros and Cons 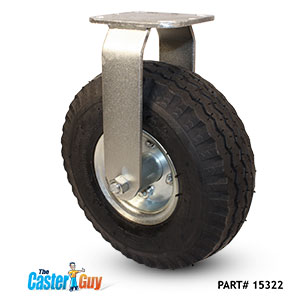 Casters come in a variety of styles, one of the most common being rigid. Rigid casters are available for furniture, equipment and other objects Like all casters, they feature a wheel attached to a frame. You can mount a set of rigid casters to the bottom of an object, thus allowing you to roll the object. Rigid casters, however, feature a unique design that distinguishes them from other types of casters.

What Are Rigid Casters?

Also referred to as fixed casters, rigid casters are characterized by a linear movement. They aren’t able to swivel from side to side. Rigid casters are still able to roll, but they only roll forward and backward.

Most casters can be classified as either rigid or swivel. Rigid casters are those that can only roll forward and backward. Swivel casters, on the other hand, can roll in all directions. What are the advantages of rigid casters exactly?

If you’re worried about the object rolling around on its own, you may want to choose rigid casters. There are rigid casters with a braking or locking mechanism. After moving the object to the desired location, you can engage the brakes or lock so that the rigid casters don’t move.

Rigid casters lack the maneuverability of their swivel counterparts. You can roll easily roll them through straight hallways and open spaces.  Turning corners, however, can be difficult with rigid casters. Rigid casters don’t have a swiveling action, so they don’t turn easily. You may, in fact, have to pick up the object to turn it in a tight space.

Aside from their lack of maneuverability, there really aren’t any disadvantages associated with rigid casters. Rigid casters offer a simple, effective and easy rolling solution for objects. As long you don’t need to turn the object in tight spaces, you may want to choose rigid casters.